PLEASE NOTE: TIMOTHY WEBB HAS TURNED HIMSELF IN AND IS NO LONGER WANTED BY CENTRAL MONTANA BAIL BONDS. THANK YOU FOR YOUR ASSISTANCE.

Timothy Webb in Bozeman Montana for Contempt of Court in the Gallatin County Court, Gallatin County, Montana, to answer criminal misdemeanor charges. Tim Webb is now considered a fugitive from justice and is wanted by Central Montana Bail Bonds Bozeman bail office, Bozeman Police Department, Gallatin County Sheriff and possibly other authorities. Tim Webb may be in hiding at certain locations in Bozeman, MT and Three Forks, MT. Webb may also be wanted for additional warrants in other jurisdictions other than Gallatin County, Montana. Tim’s brother has informed our Bozeman bail agent that Tim is likely in or near Inez or Point Comfort, Texas.

Last known whereabouts of the fugitive, Timothy Webb, was at his home on Wagon Train Trail, Bozeman, Montana. We have been informed that he may also be hiding out at times with his brother Austin in Inez Texas or with family in Oklahoma. At the time of his arrest of Contempt of Court, Tim had stated that he was working at Curry Express but now unemployed. Tim’s warrant has been posted by the Gallatin County Sheriff on 2/12/2016 and his bench warrant is now set at $5000. Charges include:

Mr. Webb, if you are reading this important wanted message right now, we need you to contact Central Montana Bail Bonds Bozeman; Gallatin County Bail Bonds Division immediately about your misdemeanor charges and to clear your bail bond at 406.350.2245.

If you do not contact our office about your bail immediately, we will begin legal proceedings against your cosignor to recover any and all fees about your bail forfeiture.

Mr. Webb, please also understand and take into consideration that CMBB of Bozeman will relentlessly pursue you until you are returned to custody. Contact our offices right now at (406) 350-2245 to turn yourself in. Or, if you know the whereabouts of Timothy Ray Webb and want to claim a REWARD for information leading to his capture; please click the button below and send us an email. One of our Bozeman bail bond agents will contact you immediately. Reward will be issued upon his capture. 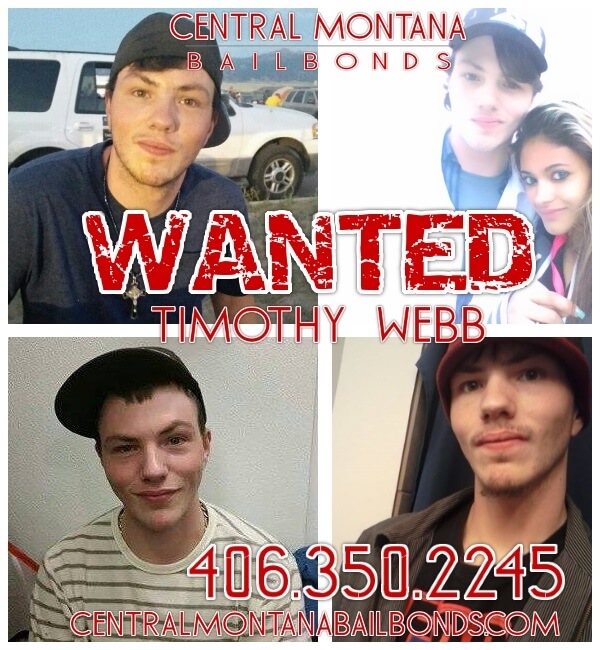 What the fuck when u think u know someone so much and just learned all about him for real on this site that’s sad Tim come home its not like ur being charged with a felony don’t dig a grave with bonds men people maybe the stupidest thing u can do come home man serve ur shit I have many contempts u don’t see me fleeing I went and sat two whole days that’s it if u turn ur self in now u could see less time then I did b smart people and stay off meth Tim.

Ok laura right?? First of all, who the fuck are you?? You ain’t nobody bitch!! Just when u know someone,, !!? Hahah your as ignorant as they come if u believe everything u read off the Webb!! We all laughing at your stupidity for real!! The advice that you “gave” Tim is worthless bullshit.. You don’t know timothy keep his name out of your dirty ass hoe mouth!! Tim is not dangerous Tim is not a criminal!! He’s a traffic violated!!! Lmao!!! To think people would go this far to catch someone who speeds or runs red lights.. Find something productive to do with your time and stop waisting ours.. When he’s ready to deal with the consequences he will,, that’s up to him not u not me not nobody you dumb ass bitch!!? Dam… I’m still laughing at how fucking retarded you are… Go somewhere else with all this elementary bullshit leave Tim alone!!! He’s a good guy… And get NATALIES FUCKING PIC OFF there!! That’s illegal to put her out like that with something she got nothing to do with!!!!!! Stupid ass drama ass dirty ass people.. Get a fuking job hoe ….. Oh and one more thing,, Tim ain’t no faggot!!! Lmao.. Isaac is his bro,,, stupid ass niggas!!

Hello Karilynn and thank you for your comment. It’s good to see Tim has family that will voice their opinion and support. But, Tim and his co-signor signed a contract with our company to pay the full amount of his bond so he could be released from jail.
Your statement: “When he’s ready to deal with the consequences he will,, that’s up to him not u not me not nobody..” while heartfelt, it’s incorrect in the eyes of the law. Tim pledged to take care of his legal responsibilities to the Courts and to our company. Much like any bond company, we have a responsibility to the court to either locate the fugitive and return him to justice (regardless of the alleged criminal action) or pay his bond amount. In turn, we then have to file against the cosignor… this process is made so much simpler when people do the right thing after they’ve been caught doing the wrong thing (allegedly).

Your statement “To think people would go this far to catch someone…”, understand that this is a business and that we treat all fugitives in the same manner regardless of the amount of bond or reason they’re running. We have a duty to the courts, plain and simple. We treat all clients fairly and have been known to be more than willing to work out any problem they may have. Our clients simply need to do the right thing. Again, we’ll stand by our clients in their time of need and always have.

As for any images, these were located across Facebook and are deemed “Fair Use” under the conditions of “Reporting” and the 3 other balancing positions. Please see: Section 107 of the Copyright Act. The only person who can request removal of the image would be Tim as he is the owner of the work as it was his image posted on his public Facebook wall. Although, depending on the app used, there may be additional licensing factors involved for him to completely get it removed from Facebook. Please see Section 2, Item 4: https://www.facebook.com/terms. Please also note, we didn’t mention the girls name in the photo, you’ve done that. As well, thank you for letting us know who his other brother is.

We hope this helps answer some questions for you and any other reader.

Ed is All said:

Remove the picture of Tim an the girl IMMEDIATELY! Displaying any, an i mean ANY litature or visual information regarding her to the the matter crosses several legal matters such as slander & harassment, false accusations ( regarding the possible capure of an innocent by stander) You have only this warning. If the picture is not removed come Monday, more serious matters will be arriving at your very door step
by: ghostcantbust@gmail.com at 207.243.120.26

Thank you “Ed” for your comment. Please see our reply to Karilynn which should alleviate any concerns you may have. As well, if you’d like to talk with us, we’re open 24 hours to help answer any additional question you may have.

I’m new here, I admit, but as a “visitor’ to the website, I find it disturbing to see the reactions posted on a public website from family and friends of the Wanted individual. Surely every one knows the legal system in this country changed, I believe when children started murdering their parents. Children began being charged as adults. Regardless of what Mr.Webb did or didn’t do, as a Family, they should be getting on his Asz bout bringing unnecessary drama & attention to the family and just turn himself in. The rest of the family would all really do well with some Anger Management classes or some therapy. I hope y’all catch him soon. Ur all doing a great job, our work often goes unappreciated but Too Bad lol.

Thank you Anna for your comments and support. I think families should support their relatives in their time of need, but not in the manner some have chosen. As for what Tim has and hasn’t done – this is all public information: Tim Web Open Bench Warrant

i know where tim webb is. how much is the reward and how fast do i get the money?

Rewards are paid as soon as we have verification the fugitive is in custody. We’re in receipt of your info from the other day and have bounty hunters looking into your tips. Again, all information is kept strictly confidential; we appreciate the assistance. #CMBBI

Timothy Webb, i just want you to know that I think what you are doing is wrong, but thank you for the reward I’m going to get paid for letting them know how to find your dumb ass! You should turn yourself in and make this process faster for me. It’s scumbags like you who make it harder for people to get bail in Montana for the rest of us. When you ran away like a bitch it costs more to go get you and bring you back. You and that bitch girl of yours need to grow up. Does she know what a scumbag you are and what your real charges are… and what girl you was going to visit when you got popped? Bet she don’t… lol. I can’t wait till they find you and I get the reward money!

I was wondering if you still had the reward for Tim Webb and if he still had a warrant. I’m a beginner bounty hunter in Texas and think I can apprehend him for you. Please message me when you get a moment.