PLEASE NOTE: CHRIS COLE WAS CAPTURED BY CENTRAL MONTANA BAIL BONDS. Thank you for all of your help in locating this fugitive.

Christopher Cole CAPTURED in Kalispell Montana for Possession of Dangerous Drugs in Flathead County, Montana, to answer criminal felony charges. Chris Cole, who at one time was a police informant, is now considered a fugitive from justice and is wanted by Central Montana Bail Bonds Kalispell bail office, Kalispell Police Department, Flathead County Sheriff and possibly other authorities. Chris Cole may be in hiding at certain locations in Kalispell, MT and Hungry Horse, MT. Cole may also be wanted for additional warrants in other jurisdictions other than Flathead County, Montana. 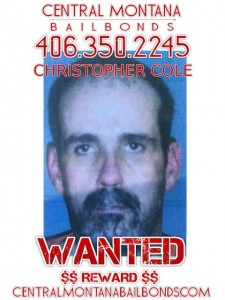 Last known whereabouts of the fugitive, Chris Cole, was at his 2nd girlfriend’s home on 7th Ave E, Kalispell, Montana. We have been informed that he may be in hiding at his main girlfriend’s (Heather) home, in Kalispell or with A family in Hungry Horse. At the time of his arrest of Possession of Dangerous Drugs, Chris had stated that he was an unemployed roofer so at this time we do not know if he had an employer or not. But we’re checking… everything.

Mr. Cole, if you are reading this important wanted message right now, we need you to contact Central Montana Bail Bonds Kalispell; Flathead County Bail Bonds Division immediately about your felony charges and to clear your bail bond at 406.350.2245.

Be advised that as a former police informant, it would be better if you turn yourself in now to us or the Flathead County Sheriff as we understand there may be other people, not in the law enforcement community, actively searching for you.

If you do not contact our Kalispell bail bonds office about your bail immediately, we will begin legal proceedings against your cosignor to recover any and all fees about your $20,000 bail forfeiture.

Mr. Cole, please take notice that CMBB of Kalispell will relentlessly pursue you until you are returned to custody and the obligations of the bond have been fulfilled. You must contact our office right now at (406) 350-2245 to turn yourself in.

Or, if you know the whereabouts of Christopher Theodore Cole and want to claim a substantial REWARD for information leading to his capture; please click the button below to send CMBB bondsmen an email or fill out the included form which is located at the very bottom of this wanted message about Chris Cole. One of our Kalispell bail bond agents will contact you immediately. Reward will be issued upon his capture and your information will be kept completely confidential.